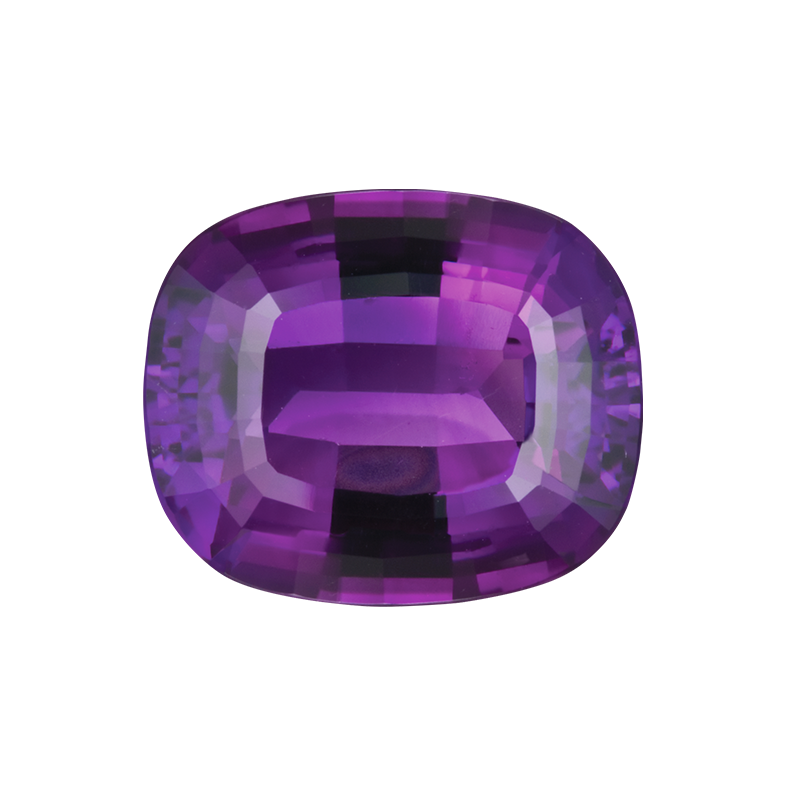 “Amethystos” means “not drunk” in ancient Greek. Because of its wine-like color, early Greek legends associated amethyst with Bacchus, the god of wine. It was believed that wearing amethyst, a quartz, prevented drunkenness. Other legends reflected beliefs that amethyst kept its wearer clear-headed and quick-witted in battle and in business affairs. Fine amethysts have been set in religious jewelry and royal crown jewels for ages. It’s no wonder that fine amethyst
adorns the fingers of bishops as well as the coronation regalia of British royalty.

Color
Amethyst is the purple variety of the mineral quartz. It’s the gem most commonly associated with the color purple, even though there are other purple gems such
as sapphire and tanzanite. The purple can be cool and bluish, or a reddish purple that’s sometimes referred to as “raspberry.” Amethyst also commonly shows what is called color zoning, which usually consists of angular zones of darker to lighter color. Amethyst is faceted in many shapes and cutting styles.
This 14K gold Victorian brooch, set with an amethyst and natural pearls, dates from the late 19th century. Believed to quicken intelligence and dispel evil thoughts.

Clarity
Much of the faceted amethyst in the market is “eye clean,” meaning it lacks eye-visible inclusions. Any visibly included material is usually cut into cabochons.
Gem professionals overlook minor inclusions when the gem is richly colored and of otherwise high quality. Visible inclusions in light-colored gems reduce their
value greatly.

Sources
Russia was the major amethyst source until the 19th century, when a huge amethyst deposit was found in Brazil. The once scarce purple gem was
suddenly in abundance. Today, the two major sources for amethyst are Africa and South America. African mines provide most of the fine color amethyst on the market today.

Treatments
Heat treatment is the most common technique for improving the color of natural amethyst. It can lighten the color of very dark amethyst but it cannot darken the
color of pale amethyst.

Care and Cleaning
Amethyst can be safely cleaned with warm, soapy water. Ultrasonic cleaners are usually safe except in the rare instances where a stone is dyed or treated by fracture filling. Steam cleaning is not recommended, and amethyst should not be subjected to heat.

Source: The Passion of Colored Gemstones by GIA